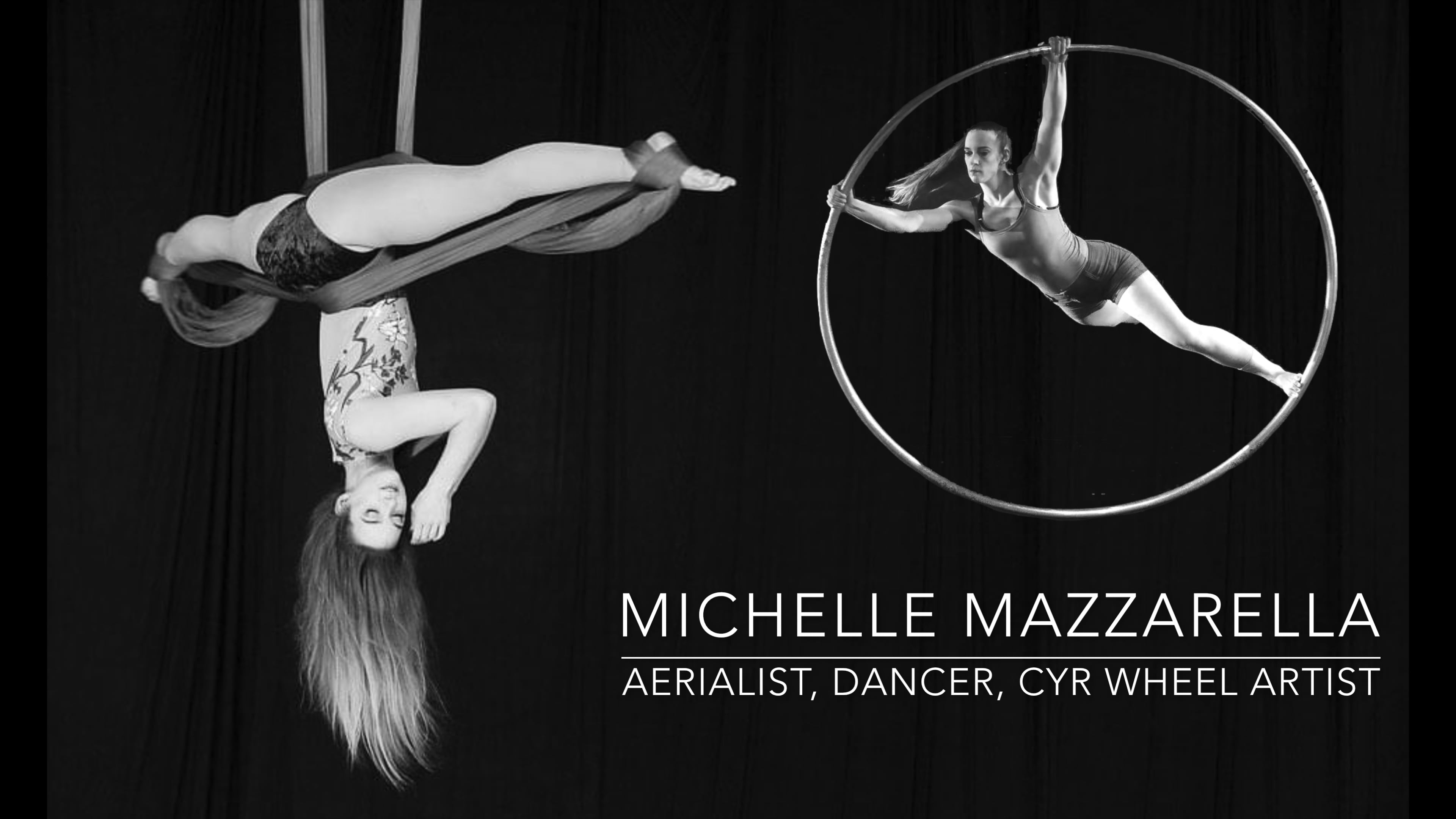 "Through electrifying aerial and  dance work, she feeds her audience  with a striking synesthetic experience."

Michelle Mazzarella is a choreographer, aerialist, dancer, producer, director, and teacher. She began her career as a dancer at age two, and achieved her Bachelors Degrees in Psychology and Dance from the University of California, Los Angeles. At UCLA, she directed both ICARUS Contemporary Dance Company and Foundations Choreography. In greater Los Angeles, Michelle joined TheCRayProject and Q.K. Entertainment, and performed and choreographed for LA Unbound. She has appeared on screen for Todrick Hall, Flood Your System, and The Mother Company, and on the runway with Fashion and Student Trends.

After graduating from UCLA, Michelle moved to Traverse City, Michigan, where she began teaching and choreographing for Interlochen Center for the Arts, The Old Town Playhouse, and Company Dance Traverse. She soon discovered aerial arts, and completed the highly regarded ProTrack Program at the New England Center for Circus Arts. At NECCA, Michelle specialized in Aerial Fabric, Sling, and Cyr Wheel. Her most recent projects include developing acts on her own unique vertical apparatus, combining single point trapeze and aerial sling. While in school, she performed with Halcyon Shows in their production, Aureum, and was a freelance circus artist with the Boston Circus Guild. After graduating from NECCA, Michelle is now on tour, performing alongside the British duo Young & Strange in the large-scale production, Champions of Magic. No, she can't tell you how the illusions work, but she loves every second of it!

As a performer, Michelle has been described as versatile, genuine, vulnerable, prepared, and present. Her masterful manipulation of musicality and texture are a staple of her work onstage. As a choreographer, she takes joy in inspiring her audiences and performers alike, and is a dedicated team player with a strong foundation in choreographing a variety of genres for both stage and screen. As an educator, Michelle encourages her students to discover their potential by challenging themselves, all while cultivating a safe and nurturing environment. She tailors every lesson to her students' needs, and utilizes a wonderful combination of improvisation and premeditated lesson planning, keeping these specific learning outcomes in mind. She spends her spare time as a freelance petsitter snuggling ALL the doggos, sending snail mail to her pen pals, painting, drawing, knitting, and embellishing costumes. Michelle has been described as a “true Renaissance woman,” and is a lifelong learner of her many crafts.